Published by Steven Smeltzer in Landscape and seascape 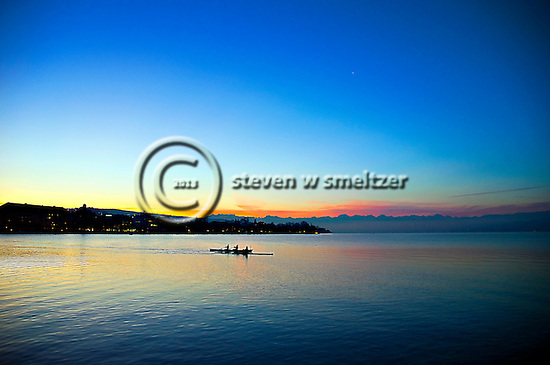 The air cool and crisp, the water on the lake calm as the city begins to stir and the sun starts to rise over the mountains.  Time for a great cup of coffee.

The city is culturally vibrant, efficiently run and attractively set at the meeting of river and lake.  Zurich is regularly recognized as one of the world’s most livable cities. Zurich, long known as a savvy, hard-working financial center and Switzerland’s largest and wealthiest metropolis has emerged in the 21st century as one of central Europe’s hippest destinations.  Zurich has an artsy, post-industrial edge that’s epitomized in its exuberant summer Street Parade.

Much of the ancient center, with its winding lanes and tall church steeples, has been kept lovingly intact. Yet Zurich has also wholeheartedly embraced contemporary trends, with the conversion of old factories into cultural centers and creative new living spaces. Nowhere is that clearer than in Zurich-West, the epicenter of the city’s nightlife.

I love the old city and the lake area near the city center.  Walking by Grossmünster or Fraumünster, stepping into the many shops along the narrow streets, or stopping for coffee or a light lunch in an outdoor cafe. The old world charm and vibrancy of the city are readily visible.  Strolling along the lake or walking  through the narrow streets of the old city of Zurich allows you to go back in time and imagine what the city was like hundreds of years ago.  I especially like getting up early and walking to the lake and seeing the sun rise.  It is especially peaceful and serine.  After a nice stroll there are a number of wonderful coffee shops close to the lake and in the old city where you can relax, read the morning paper and appreciate the wonderful atmosphere that is Zurich.